Statement
The South Pennine Orefield mineral vein dataset was digitised from 46 1:10560 and 1:10000 BGS geological maps. It was part of the multidisciplinary study that was eventually published as a book entitled ‘Metallogenic models and exploration criteria for buried carbonate-hosted ore deposits - a multidisciplinary study in eastern England’ (Plant, J A and Jones, D G (editors) (Keyworth, Nottingham: British Geological Survey; London: Institution of Mining and Metallurgy). The data consists of numerous pairs of Eastings and Northings which were 'stream digitised' from the maps over a 3 month period and included digitised veins, 'pipes' and faults. These were hand-joined veins across map sheet boundaries by editing each end XY pair to match across the boundary. The data set was added to by some additional veins from published sketch maps in the Peak District Historical Society Bulletins but the majority were from BGS maps. The data was stored on a VAX archive tape and eventually translated into Word and then Excel and finally an ESRI shapefile version was created. No further work has been done on this dataset since its collection and translation and it contains no attribute information beyond the distinction between faults, pipes and veins. 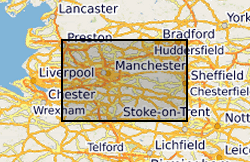