Positional Accuracy - Cartographic Accuracy plus or minus 50 metres. Accuracy of geological interpretation not assessed.

This dataset is the Derived Postcode Database (DPD) issued as part of the GeoSure Insurance V7 product, incorporating postcode data from OS Open CodePoint Data 2016.1. The GeoSure DPD is a stand-alone database, which can be provided separately to the full GeoSure Insurance Product V7. The GeoSure Insurance Product (including the Derived Postcode Database) represents the end of an interpretation process, starting with the BGS Digital Geological Map of Great Britain at the 1:50,000 scale (DiGMapGB-50). This digital map is the definitive record of the types of rocks underlying Great Britain (excluding Northern Ireland and the Isle of Man), as represented by various layers, starting with Bedrock and moving up to overlying Superficial layers. In 2003, the BGS also published a series of GIS digital maps identifying areas of potential natural ground movement hazard in the Great Britain, called GeoSure. There are six separate hazards considered: shrink-swell clays, slope instability, dissolution of soluble ground, running sand, compressible and collapsible deposits. These maps were derived by combining the rock-type information from DiGMapGB-50 with a series of other influencing factors which may cause the geological hazards (e.g. steep slopes, groundwater). In 2005, the BGS used the GeoSure maps to make an interpretation of subsidence insurance risk for the British property insurance industry, released as the GeoSure Insurance Product. This represents the combined effects of the 6 GeoSure hazards on buildings in a postcode database. The combined hazard is represented numerically in the Derived Postcode Database as the Total Hazard Score, with a breakdown into the component hazards. The methodology behind the DPD involves balancing the 6 GeoSure natural ground stability hazards against each other. The GeoSure maps themselves have a fivefold coding (A to E), and the balancing exercise involves comparing each level across the six hazards e.g. comparing a level C shrink-swell clay area with a level C running sand area. The comparison is done by a process involving expert analysis and statistical interpretations to estimate the potential damage to a property (specifically low-rise buildings only). Each level of each of the hazards is given a 'hazard score' which can then be added together to derive a Total Hazard Score at a particular location (e.g. within a given postcode). The detail of the methodology is described in more detail in the GIP User Guide (OR/15/021) "User Guide for the GeoSure Insurance Product (version 7)", available from the British Geological Survey: http://nora.nerc.ac.uk/510820/ 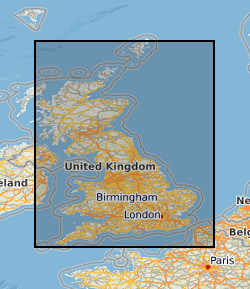