Other constraints
Access and Use Restrictions will be according to the Consultancy Agreement (March 2013) between The Crown Estate and NERC-BGS, and the related Panel of Services agreement for the Seabed Geology Characterisation Study (January 2014)

Lithostratigraphic units defined in the BGS 1:1000000 Quaternary Geology map were assessed in terms of strength and lithological variability. Lithostratigraphic units were then grouped into classess depending on their expected impact on engineering activities. The resulting classes were attributed in GIS to shapefiles defined by BGS Lex Codes (Lithostratigraphic units). Part of this dataset, mainly around the coastline, has been coarsely interpolated so that its extent covers the whole factor map area. The methodology used to fill in no-data areas consists of dividing these areas into square grids (10x10km) where each polygon within the grid will get assigned the category value of the polygon sharing its border in an iterative process until all polygons within the grid have a category value. This iteration was done by running the ArcGIS Spatial Join tool several times with the match option “SHARE_A_LINE_SEGMENT_WITH”. The final step is merging the now attributed grid to the dataset and dissolving the polygons. 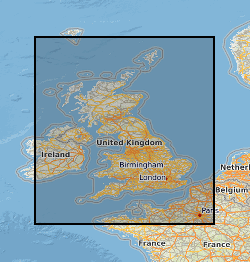