Each DiGMapGB-25 digital tile is typically based on the latest 1:25 000 scale geological map. These geological maps are compiled on contemporary Ordnance Survey National Grid topographical base maps at 1:25 000 scale. Most are based on more detailed 1:10 000 or 1:10 560 (six-inch to one-mile) scale geological maps, and as a consequence they have not been digitised to create DiGMapGB-25 tiles as the source 1:10 000 or 1:10 560 maps could be used to create DiGMapGB-10 data. There are about 52 tiles of 1:25 000 scale data produced by ‘rapid mapping’ surveys in parts of Central Wales, the Scottish Highlands and the Southern Uplands. These were carried out at 1:25 000 scale rather than the normal 1:10 000 scale in order to expedite completion of the 1:50 000 scale map series. The data has been digitally captured from paper record, originally using Bentley MicroStation and latterly ESRI ArcGIS software. Post capture processing has occurred to combine geometry and attribution from existing BGS data resources. Changes may have been made to the geological interpretation but major revisions to the geological lines have generally been avoided. The geological nomenclature has been reviewed and revised, as far as reasonably possible, to conform to the most up-to-date accepted usage; usually this will also agree with the DiGMapGB-50 dataset. The lithology of bedrock units and superficial deposits recorded for DiGMapGB-25 may differ slightly from those given for the same area in DiGMapGB-50, but they should generally fall within the description used for the DiGMapGB-50 data. 34 The change from Version 1 to Version 2 reflected a major change in the coding of polygons and linear features from attribute level 11 to 18. Another batch of tiles was added to the data in 2012 to bring the total released to 167. The LEX_ROCK codes were replaced by LEX_RCS codes with the lithology based on the hierarchical BGS Rock Classification Scheme. The superseded LEX_ROCK field was retained, to link back to previous versions of DiGMapGB, but demoted in the attribute list. 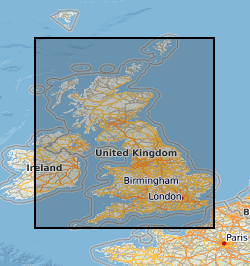